Hey Curious Creative, is it time you updated your pricing? Access my Free Pricing Calculator! 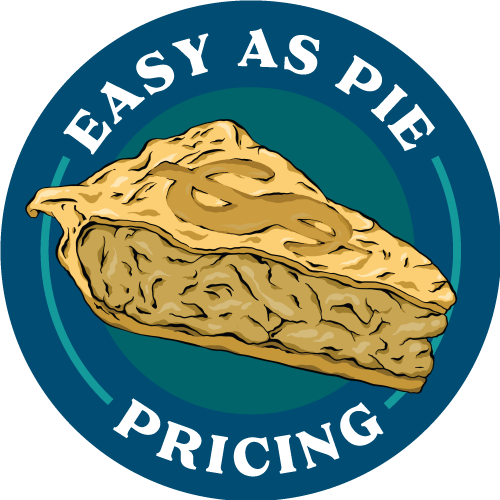 Let me tell you why Hourly Rates Suck

Let me tell you why Hourly Rates Suck

Ooof, I hope you are ready for a bit of a rant on hourly pricing... 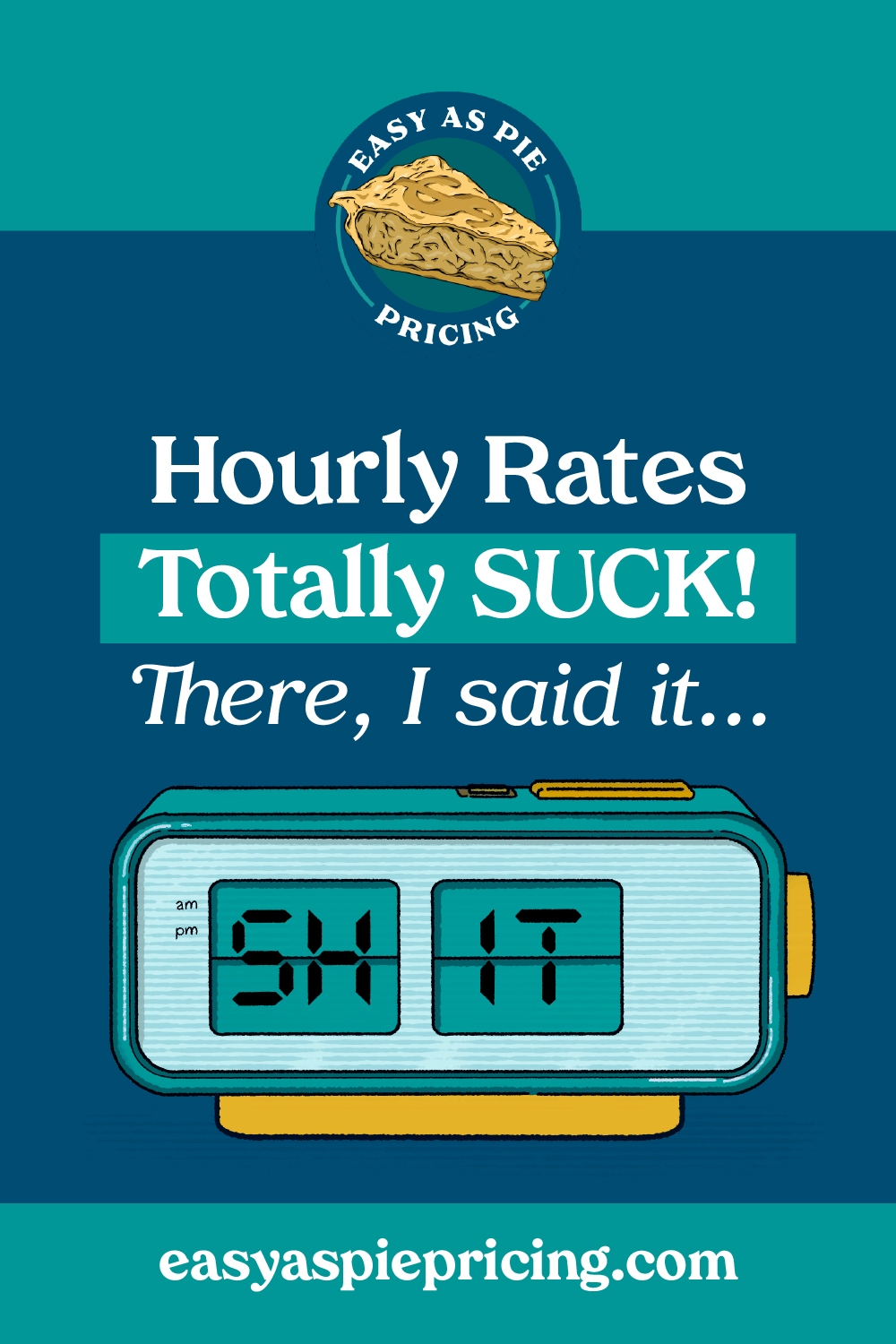 If you struggle to put a dollar amount on your time, click here to grab my Free Pricing Calculator here and run your numbers for yourself.

It's the best way to work out your unique recipe for your prices.

So Hourly Rates are common in a lot of businesses.
For some businesses, it makes sense and works, especially those who are structured in a way that they don’t lose out on that way of pricing.
But what about creative businesses? For us, hourly rates may be common, but they are a recipe for disaster when your creative business grows.

We’ve all been there on the other side of the equation, where we have hired them on a pay-per-hour system. It makes sense because it’s common place and traditional. But in these situations, we can sometimes end up watching the clock, trying to get the best value for money when it comes to time spent. Hourly pricing works for some businesses because that structure is suited to their deliverables, their profit margins and their processes. And that’s great for them…

But hourly pricing sucks as a freelancer and a creative. I’m sure there’s other industries that it sucks for, but this is a blog written for creatives by a creative, so it only makes sense to write from that view. This blog aims to look at the reasons why it doesn’t work in most cases for us (read to the end to see how you can make it work).

Before I dive in, I want to make this super clear.

Your Hourly Rate and the dollar amount you put on your time are two completely different things.

An Hourly Rate refers to when a client buys your time and it’s tracked and billed simply with that structure. The monetary reward you get that is exchanged for time.

The dollar amount you put on your time (I refer to it as your Billable Hour) is the result of the calculations you have made to work out what your time is worth based on your income, expenses and hours. Think of it as your personal rate, the cost price of your time that you multiply by the hours spent to get the labour cost, which you then add on value and materials.

Ok, with that out of the way, let’s dig into why Hourly Rates SUCK!

So the first big problem with hourly rate pricing is that if you don’t raise your rates often enough to account for you improving in skill and efficiency, you’re going to end up being penalised for being ultimately better at your job. We all want to be able to do the things we are getting paid for faster because that means we can get back to doing the things we love like playing with the dog or cooking.

But if we get faster at something, and we’re working on an hourly rate system, ultimately we will end up getting paid less the better we get at doing it quicker. See where that doesn’t make sense? You’re being unfairly penalised for something that is actually an incredibly valuable asset; efficiency and skill!

This is a doozy because it’s only really in the last 5-10 years that we really having been bringing value into the equation when we talk about pricing creativity.

So in this, the best way to look at it is if you were to create a product and it took you 10 hours, so you charged 10 hours, but then it went on to generate the equivalent of 100 hours worth of value, the creative is massively short changed! This is where accounting for value is so important because it can be easy to get caught up in the dollars for time mentality and forget that what we are doing actually generates value for our clients. And if the client is getting a massive slice of the pie and you’re only getting crumbs, something’s gotta change in the recipe.

It can hinder the creative process

So as creatives, we know that the creative process needs time to marinate. Forcing creativity simply doesn’t work. I don’t know how many times I’ve tried to get an idea to work before it’s fully worked it’s way through my brain, down through my arm and hand and onto the paper. It gets caught if it isn’t ready, or it just ends up a sloppy mess. Feeling like you’re rushed or chasing the clock only makes it worse, and creativity can’t thrive in a stresses out environment. By working at an hourly rate structure, you’re severely hindering your ability to be creative, which is what you’re usually great at, and that leads to some pretty dark places. Creatives need time. And that’s not hourly rate time.

It stresses out clients

What if someone came to you and told you the job you asked them to do “will take as long as it takes and I’ll bill you when I’m done”. Stressful, right? It’s kinda like writing a blank cheque and hoping for the best. This structure can also be terrible for business and budgets because most corporate client operate on those systems are are chasing profit. If you say it could be $50, $500 or $5000, straight away that threatens their profit potential. That sort of thing is a breeding ground for stress. And ultimately, this is where we find micromanaging clients and ones who make you feel rushed. We know that’s not where we want to be, and neither does the client for that matter!

It limits a creatives earning capabilities

As much as we try to create more time and hours in the day, we can’t. We’re creative, but not that creative! By pricing per hour, we have put a limit on how much we can charge. Not every hour in a creative day is billable either, so knowing this, we need to account for those non billable times. And all of a sudden we have even less hours we can actually bill for. That sucks, because we’ve gone from working every possible hour in the day (I see you), to realising we can’t bill for every hour of the day, ending up charging the client 3 hours for something that actually took us way longer.

If you struggle to put a dollar amount on your time, click here to grab my Free Pricing Calculator here and run your numbers for yourself. It’s the best way to work out your unique recipe for your prices.

So does hourly pricing ever work?

In short, the answer is yes. But it needs to be the right situation.

More often than not, you’re going to have clients ask you “what’s your rate?” to work out whether they can afford you or not. And whilst this isn’t always the best way for them to find out, they’re just doing the best they can and asking in a way that they know how. I have had to try and stop getting annoyed at clients in this, because really, how else are they going to be able to find out if they can afford my services?

Now you have probably read the above and been like “OK, so hourly is out. No more hourly rates,.” but I am not saying that 100%. I would say that hourly rate work accounts for maybe 10-15% of my income for my business, with the rest being project rates, products, as well as licences and value based pricing. So what particular situations work for hourly rate pricing?

When the scope is unclear

A really important part of any quoting process is understanding what it is you need to deliver to keep the client happy. But sometimes it’s unclear really how much is needed or how long it’s going to take to reach that deliverable that the client has in mind. Just remember that it’s up to you to keep communicating to the client that this is the situation so they don’t get bill shock and ultimately blame you for the situation.

So say for instance that you have a client where not all the work can be done at once, that the client has a larger project to be completed over the next few days/weeks/months and the requirements are going to change with the passing of time. This is a great way to work with the client and track your time to be billed accordingly. Keep in mind that when working like this, you are likely to be seen as working with the client rather than for them, which has positives and negatives that come with it.

When it’s setting up expectations for future work

A really good way to set up expectations for a job that will be ongoing or repeated is to use the first time you do it as a testing phase. This way you are still getting paid for the time you are spending and you’re setting the expectation with the client from the very start. Another added bonus of this is that often, once you have done something once, you’re going to be faster the second time, so setting the price based on the time spent the first time and charging it as a whole rate can be really beneficial to your profit capabilities. After all, they are paying for the deliverable, not the time.

When you can package the offering.

This has been a great little hack for me as I use it when clients are looking for a way to budget something that could blow out of scope. So I have, in the past, said to clients this job should take 10 hours but we may go over if things get out of hand. What I can do is provide a 10 pack of hours and we check in at hour 8 or 9 and you can decide from that point where we go based on what’s left to do. More often than not, clients are massively appreciative of this structure because it allows them to budget but sets the expectation that things may be more expensive. Win win!

Knowing your hourly rate is important and you don’t have to disclose them if you don’t want to. Clients are free to request but if it’s something you would rather keep private (and you can btw) you can choose to answer “I don’t work on hourly rates but prefer to create a more bespoke and budget friendly option based on your unique job.” This then opens up conversations around aims, budgets and how the client will measure success, which is way more important than how long it will take!

Still hungry? Check these dishes out... 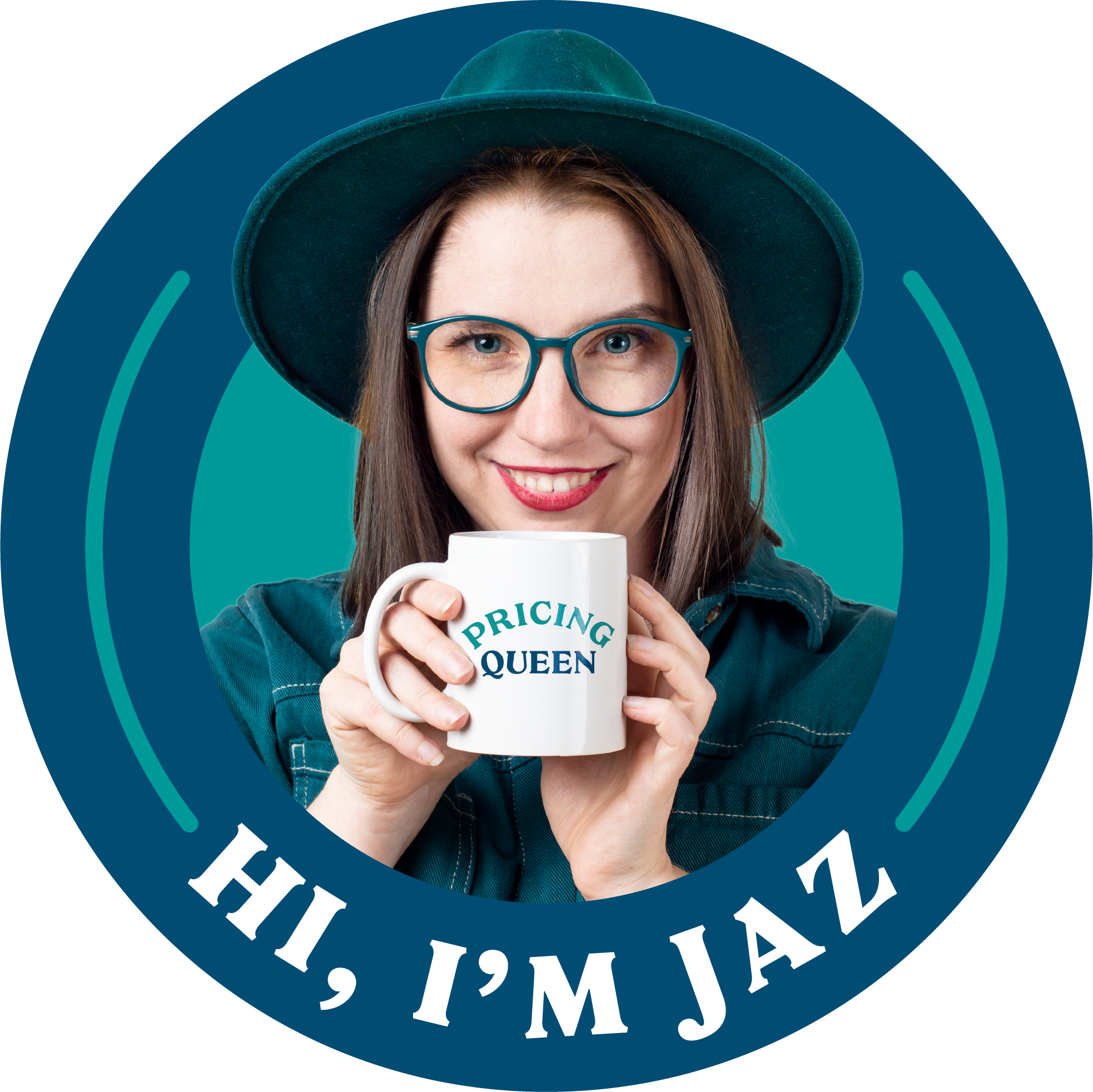 Lovingly written by Your Pricing Queen

Passionate about Pricing, Puns & Pie, Jasmine has spent the last 14 years building a 6-figure-profit design career, perfecting her processes & recipes to share with hungry creatives just like you!

Hungry for a slice of pricing advice and tricks delivered piping hot to your inbox?

Sign up below and I'll send your order to the kitchen!