Moab than I could have ever asked for...

LetterWest Retreat, Moab than I could have asked for…

From the moment I stepped off the plane at SLC Airport, I knew this was going to be a trip to remember.

For those who don’t know, I just returned from LetterWest Retreat. It was a 4 day retreat held in Moab, Utah, with 30 something creatives in one big house, complete with speakers, workshops and so much more. If you want to read more about LetterWest, head here.

I have to admit, I had to get over some pretty big imposter syndrome stuff to get here. Becca, the creator of Letterwest, had awarded me one of two scholarships available and the moment i was told I was going, I freaked out. I was honored and humbled and out of my mind excited. My second thought? Was I good enough to be there. Was I taking the place of someone else who deserved it more than me. And would anyone even like me when I was there, would I get along with people (I can sometimes be a bit of an acquired taste…)

But putting all that aside, I pushed myself, booked my flights and made the 16+ hour trip to SLC Airport. I was literally skipping through the terminal because I was so excited.

I met the group and we all started to get to know each other. So many new faces, new creatives, new stories and new personalities. I was overwhelmed and super tired from the flight, but I admit I was giddy.

A 4 hour bus trip later (I slept most of it), we arrived in Moab and were greeted with an incredible location. Surrounded by Moab rock, staying in a beautifully decorated villa, I was floored. This was going to be incredible.

We all checked in and found our sleeping spots. Shout out to my wonderful roomies Katie and Kylie. These women became such wonderful companions for me, sharing their stories and letting me share mine. The chats we had I will never forget and cherish forever.

First we had Becca officially open the retreat and share her story. I had actually done a course with her run by Austin Saylor, having weekly group video calls and chatting about our projects, and I had followed her career path for quite a while. What she shared was so wonderful, so powerful and truly captured why I look up to her so much. She is a creative work in progress, just like me and my fellow retreat family.

After a delicious dinner, it was Erik Marinovich’s time to speak. It’s truly an art to be able to translate the feeling music gives you into visual representation, and Erik does this flawlessly. He was approachable and real and so authentically himself, you couldn’t help but be drawn in by his story and teachings. Make time to create. Collaborate with others. His whole talk was around hip hop and how it relates to his work. This first talk got me excited for his workshop we were doing the next day, I was truly feeling inspired by everything around me.

Traveling that much and my sleeping pattern completely muddled, I was up before the sun and watched it rise over Moab both mornings. This was incredibly relaxing, giving myself time to take in the day before the crazy. There was also a large group doing yoga on the first morning, but coffee was keeping me warm.

Workshop number one was with Mary-Kate McDevitt. This little pocket rocket of a person was everything. Her personality and energy was infectious and made the first class full of giggles and the creativity was in the air. Challenging us to let go of preconceptions and references, she encouraged us to doodle, to play, and to create in a way that was incredibly foreign to me. In my day to day, I tend to play less and work more, so this was a nice but jarring change. The true take away was obviously that all animals should wear hats or sunglasses, and most things can be made better with a swirl or two.

After lunch, it was time for Erik’s class. Prior to the class we were to find a picture of a chosen music artist to create our own version of his project Hip Hop Hullabaloo. We also chose a short line or phrase from their song and create a lettering piece. But first, I learnt some valuable techniques to warm up when creating. Using different tools and line heights, we wrote out the alphabet in different ways to push our creativity. This practice is something he does every morning and it felt so good to let go and just write. 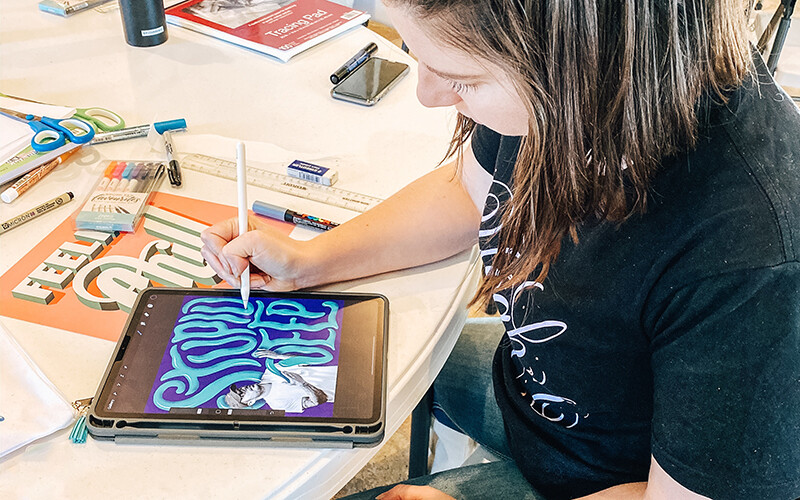 That evening we heard from Sabeena. I had been following her for longer than I can remember, I actually think I followed her as one of the first creative accounts on my feed. I have always had a love for quilling and papercraft, my mum taught us quilling when we were little, so to see someone so masterful speak about her craft was incredible. But her talk was more than that. It was one of empowerment, of challenging the norm and being proud of the you that you are. The patience this woman has, her attention to detail and precise nature are qualities I hope to have to the same standard one day. 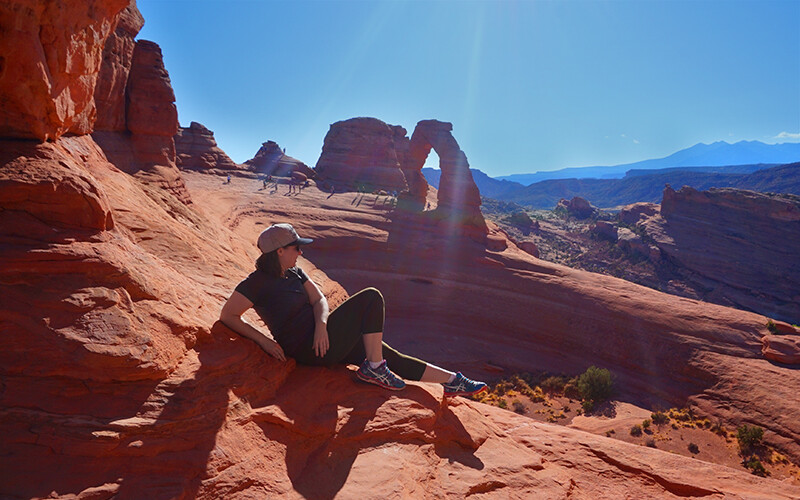 Day 3 started with a hike to Delicate Arch. For those who don’t know, literally google Moab and it’s there. It’s monumental. You look at it and think ok, that’s cool, wonder how it got like that as an arch. And then you stand under it and are immediately reminded how small you are in the world in comparison. Hiking up this trail, many of us realized how much we really do not work out that much, huffing and puffing much of the way, but damn the view was worth it.

Back at the house, we got ready for Sabeena’s workshop in papercraft and quilling. As someone who had a bit of pre-training from mother dearest, I felt right at home. I cannot express the patience needed for this, for the acceptance that it takes time being a necessary element in the process. To give you an idea, these pieces can take up to 3 months. I was so thrilled with how my piece turned out, getting much love and praise from my fellow classmates and teacher. It felt great to create for me and be proud of the result.

It was then time for Mary-Kate’s talk after dinner, which we started with eating our dessert in front of her as we were running late. The thing I loved about Mary-Kate was her unapologetic approach to her craft. The energy she has is so evident in every single little piece she presented, it captures you in the pieces and leaves a little hat on your heart. Truthfully, I didn’t research her beforehand, and I’m glad I didn’t. It was like being taken through this Disneyland of creation, with each piece containing its own story and sense of wonder. Later in the night, when I won the prize of her book, I made a noise that I had teased her for making, like a bubble surprise and joy being popped in your throat. We laughed about it after, she has left a huge impression on me I can never thank her enough for. 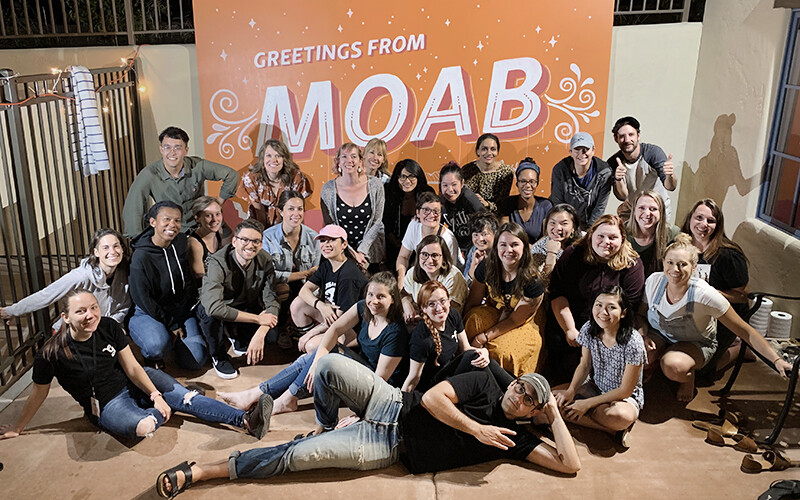 The after party was a whirlwind of mural painting in the rain, hot tub chats, fake tattoos, swag and sticker swaps and yearbook heartfelt messages. This group of 30 something people over the course of a few days had become so tight and the outpouring of love and family was so strong.

I’ll admit it, I cried leaving on the last morning. My heart was so full, I had made this group of friends that I knew I’d be able to keep in contact with and share future creative pathways with. It seems silly really, all it was was a few days in the desert with a bunch of people I had never met. But it was so much more. It was the connections over creative block and clients from hell, it was the inside jokes and silly banter over delicious food, it was the connection with fellow humans to remind ourselves just that; that we are all humans. 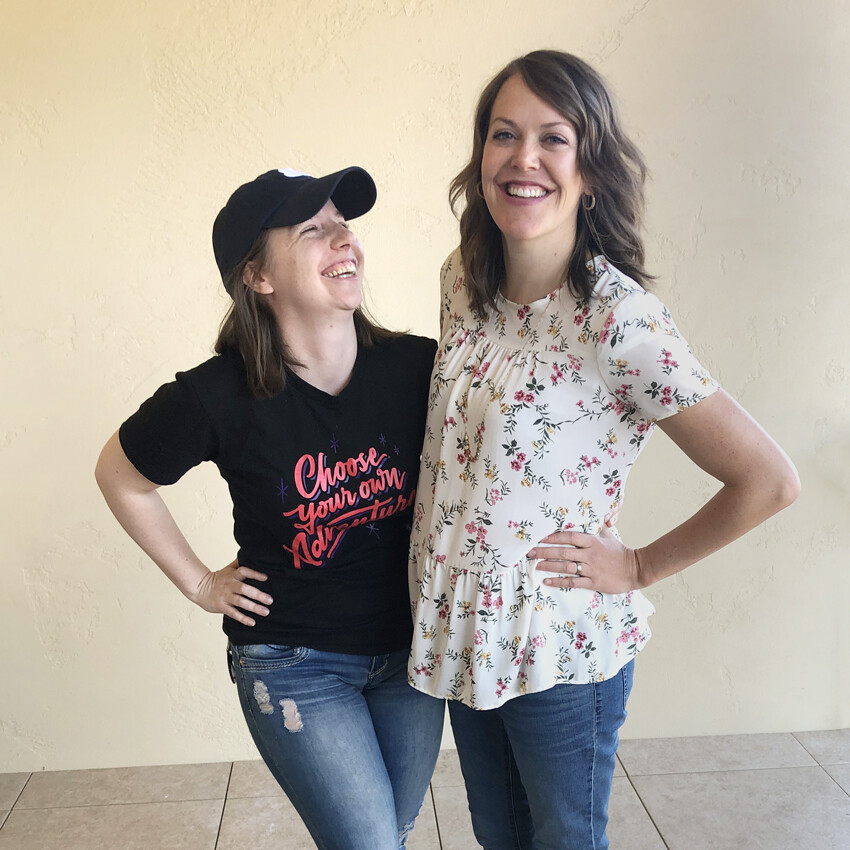 I cannot thank Becca enough for the opportunity she afforded me. By close of retreat, I felt loved by my peers, captured by creative inspiration, but most importantly, I felt worthy, and that meant so much more.

So, are you ready to hire your new design superwoman?

Finding the right designer to bring your vision to life is all about communication.

Book a time with me to discuss your next exciting project. Looking forward to chatting with you soon!